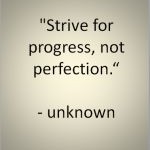 I get the impression many trying to build their business online spend too much time learning when they should be acting.

However I believe that you should not strive to get everything perfect before taking action.

The graphic that I’m using as a header is a good example. I wanted something to use on my blog and Facebook page that suggested my approach to internet marketing. Putting components in place and building a business step by step. I was going to show this idea by have an image of labelled building blocks connected together.

However when I came to arrange and connect the blocks it became apparent that the connections were too complex to show in a simple image. I could have spent ages trying to arrange the blocks so the multiple connections between them made up a tidy, organised graphic. Instead I decided to drop the connections and just show the blocks. I may return to the problem at a later date, but it’s way down my to do list.

I could have then passed creating the image to someone with graphics experience. Instead I used firstcovers.com and did it myself. And I know I did a less than perfect job. Yet the uneven block sides and corners that aren’t quite right embody the principle I’m refering to. If it’s good enough to get the idea across it doesn’t have to be perfect.

Having created the graphic I could move on to more important matters. Like the content for my blog.

When I decided to take part in giveaway events I could have spent weeks creating several ebooks, setting up a back-end offer and an email sequence. Instead I made one ebook and entered my first event for over two years. Consequently I started building my list sooner.

If you cannot think of specific progress you have made in the past month beside studying then in my opinion you are far better off jumping in and taking some action. And don’t be afraid of making mistakes. Google has famously progressed in the past using the ‘fail fast’ principle. The quicker they make mistakes the quicker they learn and the sooner their product is better.

Take action and get things moving. Start laying the foundations of your business and plan to build from there. It’s much better to start building your internet presence than to remain invisible online while you strive for perfection.

Are you a perfectionist? Is perfection holding you back from taking any form of action to move your online business forward? Do you wait until everything is ‘just right’ or do you have the ‘fail fast’ attitude? Let me know in the comments below.