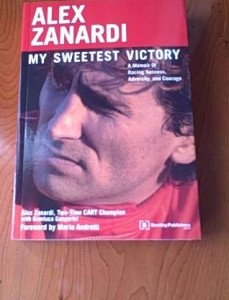 I have just finished reading ‘My sweetest victory’ by Alex Zanardi. I bought this autobiography because Alex once drove for Lotus (my favourite team when I used to follow F1 closely) and because recently there have been several inspiring stories about this racing driver who lost his legs in a horrific racing accident. His injuries were so bad that his heart stopped three times en route to the hospital.

I wanted to understand his approach and the outlook on life that has enabled him to stay so positive after such a life changing incident. I wanted to discover the sort of mental attitude, courage and optimism that enabled him to get on with his life and return to racing with prosthetic legs.

Having read the book it seems Alex believes his strengths come from the way he viewed his situation, seeing what happened to him as a problem to be solved and not something to be suffered. It’s yet another example of focus and mindset being key.

During his rehabilitation he met physically handicapped people who were determined to move forward and others who had lost their motivation. Comparing the two convinced him that it was self-defeating to stay fixated on what had been lost.

He also found he had to adjust his expectations and realised that he would never be able to rejoice in his progress if he was measuring himself against what he could do before his accident. Having expectations that took reality into account enabled him to experience satisfaction in the progress he was able to make.

He also acknowledges the driving force and passion for racing that has been with him since childhood. The passion and determination that, whilst still a teenager, made him discipline himself to go to bed early when all his friends were going to the disco, or to put himself on a diet so that his go-kart could go a little faster.

So the keys seem to be focus, mindset, appropriate but ambitious expectations, passion and determination.

I hope I never have to deal with such a challenging life changing event , but I’ll try to apply the keys to my endeavours, especially when the challenges seem hard.

I have also realised something else upon finishing this book. I bought it for recreational reading, but the main reason for buying the book was to discover how Alex coped with his accident. The book is an interesting read, but the accident did not occur until page 294. Looking at this from an efficiency point of view, if I had focused only on my main goal I should have started at that page. This started me thinking about how this applies to business.

There have been plenty of times when I have researched a subject like traffic techniques, recording video or email marketing when I have persevered and read about dozens of methods even when some have been inappropriate for my business at the time. Consequently I have wasted a lot of time gathering information I did not need to know or could not apply anyway.

This realisation just acted as a reminder that before we start anything we need to clarify what we want and focus on that. As well as research this principle can also be applied to goals for meetings, email campaigns, adding elements to sales funnels, and so on. It’s just another way of cutting down distractions as we move forward.